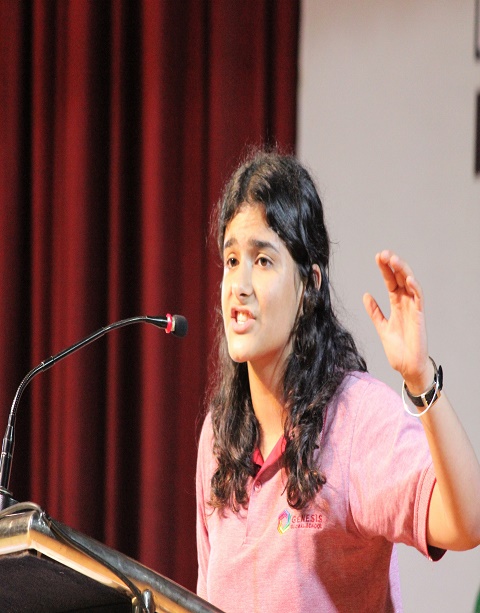 “One language sets you in a corridor for life. Two languages open every door along the Way.”

Genesis Global School believes that learning another language, especially a foreign language opens our scholar’s minds, unites them in spirit and teaches them to truly cope with the challenges they face in today’s world. Continuing on this exciting and enriching journey to multilingualism, we currently offer English, Hindi, French, German, Spanish and Sanskrit to our scholars.

English is the primary medium of instruction in the school. The study of the English language in this age of globalization is extremely essential. It is the most important language of communication not only between countries, but also in India as it has created a connecting language platform among the various states that may have different regional dialects.
It is with the help of this language that we are gaining knowledge of modern science and technology and are keeping ourselves in touch with the most progressive ideas and current trends.

English as a Secondary Language

ESL or English as a Second Language is a dynamic program at Genesis Global School that provides focussed, interactive classes which are separate from class-level English lessons. Children are guided by specially qualified ESL tutors who give one on one attention to scholars who may be learning English as their second language or are struggling to keep up in class- level English. Scholars are allowed to work at their own pace to expand their vocabulary and reading skills, as well as get a firm grasp of correct grammar, use and pronunciation. All this is done through creative writing activities, comprehension tasks and oral presentations. The scholars are then gradually integrated into their class levels English lessons.

At Genesis, students also have the opportunity of learning the nuances of another one of the two official languages of the Government of India.

Hindi, which is a standardised and Sanskritised register of the Hindustani language and written in the Devanagari script, is one of the 22 scheduled languages of the Republic of India.

Elementary Hindi is offered to scholars who have not studied the language before or need support in the same.

We also offer French, German, Spanish and Sanskrit to students.
In the Junior School students are offered foreign languages as a part of the school clubs.
In the Middle School scholars choose one of the above mentioned subjects as their Third Language.
However, Grade 11 and above scholars are expected to choose any 1 as their Second Language in addition to English.